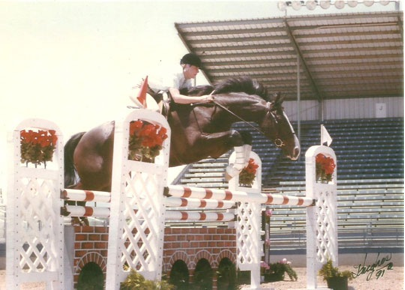 Everyone has heard stories of a horse rescued from the slaughterhouse that goes on to be a champion. This is a true story and this horse named Stick became the champion. It was because Tom Dorrance was able to introduce a different way of breaking through his fears and anxieties; proving that the mental part is just as important as the physical part.

In the late 1980’s this horse became one of the best jumpers I have ever ridden entered back into my life. The horse was one that I started for the racetrack. One afternoon I received a call that the horse could not handle the racetrack mentally and was headed to the slaughterhouse. If I wanted him I better get to the track and pick him up.  After racing down to Stockton racetrack to purchase him before the kill buyers bought him, I came home with the horse, now known as Stick for $500.00. After bringing him home I could tell that he was mentally broken and he had sores on his hips and hide missing, from him fighting the starting gates and stall.  He would tear the stall apart trying to get out. I attempted to ride him. He would not go forward, he reared, he flew backwards until he would hit the arena fence; at this point I decided to turn him out to pasture for a break. After being on pasture for 3 months and putting some weight on him I brought him in and started riding him slowly.  After hours and hours of riding, trying to get him to simply walk over a pole on the ground without flying backwards, or rearing, he finally walked over the pole and everything just clicked; he liked it and would jump anything I asked him to. However, there was still a major problem. I started showing him at some ‘A’ rated shows, but when we arrived at the show I put him in the stall and he would tear the stall completely to pieces, he wouldn’t eat or drink. I was unable to keep him in a stall and had to leave the show many times. This is when I called Tom and asked for his assistance. Tom came to the ranch and within a very short time of watching Stick work, Tom said, “I think we should lay him down”. We worked in the arena where there was soft footing so there was no danger of Stick getting injured.

Tom did not force him to lay down, he worked with Stick until he relaxed enough to lay down. This was a very strong and troubled horse.  It was a slow process that took most of the day before he finally lay down.  When he finally laid down Tom rubbed him all over until he relaxed enough to stay on the ground without help. Tom said in order to help Stick to relax I was to lay him down at every show; hopefully in the ring I was to ride in before and after each time I showed him. We worked at this again and again. I continued laying him down as Tom had done. Stick got so he seemed to enjoy it and was becoming more and more relaxed every time.

I started taking him to shows again, laying him down as Tom had taught me. People would see this happening in the arena and want to call the veterinarian thinking something was wrong. After laying him down now, Stick would go into his stall eat, drink, and later jump phenomenally.

Laying him down, so I was able to take him to shows changed his life. He became one of those horses you only come across once in a lifetime.  Another thing that Tom helped me with re-guarding Stick was to go right. We lead, saddle, bridle from the left, horses race to the left, we start left at the shows; Tom said, “Go right”.

I was at a show where I entered a high jump class, where after each horse jumped clean, the height would be raised. Everyone in the class was taking the jump by making a sharp left turn, that was what they knew best, therefore making it a very difficult jump. Stick and I (with Tom in my head saying go right) would take the jump by making a big right turn, there was more room in the arena to go right rather then left, which in turn made the jump easier. The others were wearing their horses down by asking a difficult turn and approaching the jump very unbalanced. Stick and I, thanks to Tom, continued to jump off of a right turn and it was smooth and effortless for him because he was now as well balanced to the right as he was to the left. We ended up winning the competition, jumping 5 feet 7 inches!

It was during the award ceremony while we were all in line in the arena that I pulled my saddle off and reaching down to touch Stick’s leg he laid down on his own to relax. A person can sometimes work too hard at something. This was another simple but very important lesson – “Go right”.

Stick remained with me his entire life.